F1 to Feature at Estoril

Race Ready, Promoters of the Estoril Classic race meeting, is calling for all drivers of ‘70s and ‘80s F1 cars to get in touch for a sponsored race at the Estoril Classics event, which takes place in sunny southern Portugal on 8-10 October. This will be the fourth successful year for the independent F1 race at the event, as drivers seek to prolong the summer season in the south, with generously subsidised travel for them and their cars. 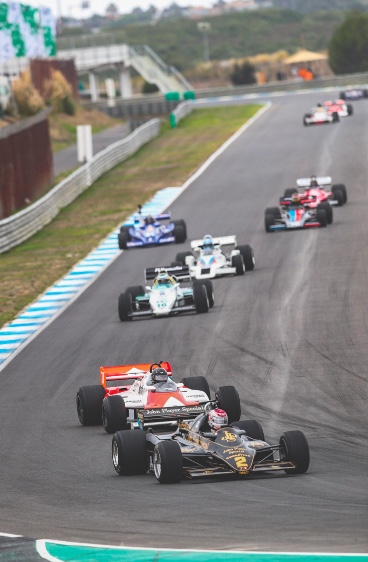 This will be the second year that Peter Auto brings the Peter Auto grids and the exceptional cars that they invariably attract, and many F1 drivers will use the opportunity to bring one or more other cars for these races. This year all the Peter Auto grids will be present and the weekend will culminate in a grand season-end prizegiving to reward all the Peter Auto Champions of 2021. The races include the 2.0L Cup, for first generation Porsche 911s; Classic Endurance Racing 1 & 2 for two eras of sports and endurance prototypes; Group C Racing, for even later Endurance cars, Endurance Racing Legends, for the most recent prototypes and LMP cars up to the 2000s; the Heritage Touring Cup for cars of the late ‘60s and early ‘70s; Sixties’ Endurance, always a favourite, with a packed grid for pre-‘66 GT cars and pre-‘63 prototypes in a 2-hour format, and Peter Auto’s own eclectic mix of exceptional GT and sports racers in The Greatest’s Trophy pair of races.

Diogo Ferrão’s Iberian Endurance series has been a regular feature of this meeting from the beginning, and this year will be no exception, with a big grid of GT, prototypes and touring cars of the 70s expected.

Another feature of this weekend, which forms the cornerstone of Estoril Classics Week, is the start and finish of the Rally de Portugal Histórico, considered to be one of the best regularity events in Europe.