Masters boldly took a date on the third weekend of the UK’s belated racing season and ran most of its key categories including F1, Historic Sports Cars and Endurance Legends.  For both F1 and Historic Sports Cars, these were the first qualifying rounds for the 2020 FIA Championships.  In truth, the competitor response was mixed, with some fair grids and others that were down in numbers.  Clearly, COVID-induced limitations on travel took its toll, with no American racers able to attend and, though UK quarantine rules were changed considerably on the run-up to the event, the news came too late for many mainland European racers to make plans.

Nevertheless, everyone was pleased to be back on track and there was some excellent racing across two mainly dry days.  There was even a better-than-expected spectator turn-out as racing-starved fans took the chance to see some glorious machinery.  The Masters team was understandably pleased with progress and was rightly expecting more competitors for its following date at Brands Hatch in mid-August. 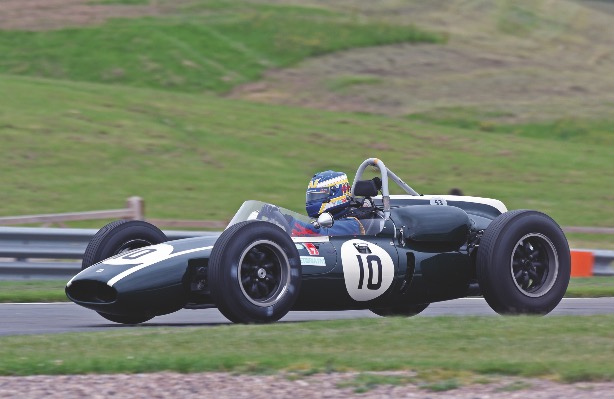 A dozen Historic F1 cars went out for qualifying, which featured three red flags in the first 15 minutes.  The sight of a driver walking down the pit lane carrying his car’s rear wing is never a good sign and this time it was Masters boss Ron Maydon who had damaged both the rear of his LEC CRP1 against the large Recticel barriers that now mark the clipping points at the chicane.  Efforts to get the car fixed for Sunday failed and so the grid was down to 11 cars. 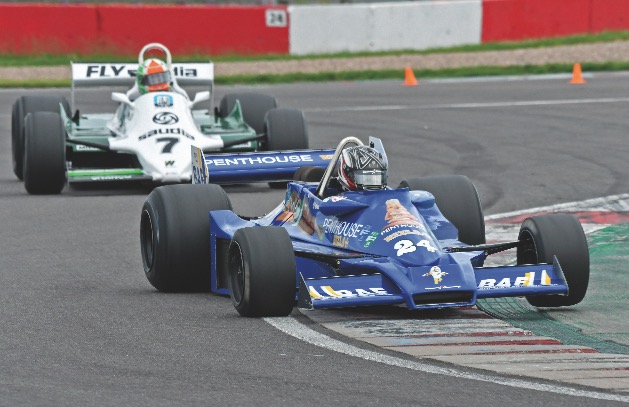 Michael Lyons, in the non-ground-effect Hesketh, led Canttillon in the early stages of both F1 races, but ultimately had to give way to the newer car

But there was still a mighty spectacle in both races as Michael Lyons (Hesketh 308) turned in two fine performances in a bid to contain the ground-effect cars of Cantillon (ex-Carlos Reutemann/Keke Rosberg Williams FW07C) and Steve Hartley (McLaren MP4/1).

While Lyons was denied a second race win within a week, Jonathan Mitchell was not after adding to his Brands Hatch Thundersports win with victory in the Masters Historic Sports Cars race in his Chevron B19.  However, in the opening stages of a race of attrition, it seemed that third would be his lot. 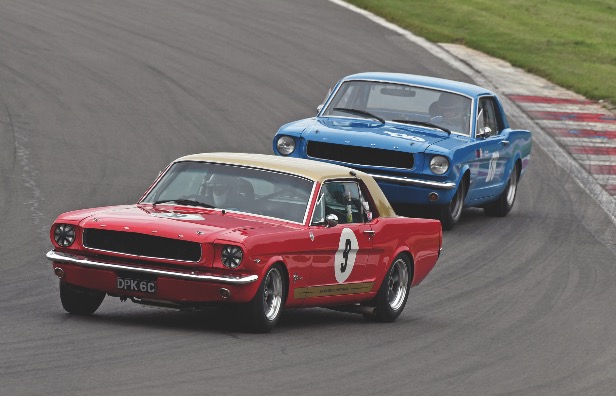 Although his Lola T70 faltered in the sports car race when in the lead, Gary Pearson did not leave Donington empty-handed, as he went solo to win Saturday’s 90-minute Gentleman Drivers’ race in a Jaguar E-type.  The original plan was for him to share both cars with Alex Brundle but the re-scheduled European Le Mans Series race at Paul Ricard put paid to that idea.

The HGPCA Pre ’66 Grand Prix car contenders suffered the only rain of the weekend with a track that got quite wet before starting to dry again in the later stages.  That didn’t trouble Will Nuthall, who started his Cooper T53 from the pit lane and charged through the pack to take over the lead from Sam Wilson in the ex-Dave Charlton Lotus 20/22, newly converted back to F1 trim with a 1500cc twin-cam engine. 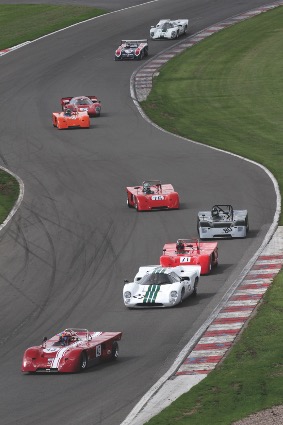 Tom Bradshaw (Chevron B19) and Gary Pearson (Lola T70) led until both were out with mechanical issues, handing Sports Car victory to Jonathan Mitchell (Chevron B19 No 71)

The Historic Touring Car race featured three Ford Mustangs disputing the lead, with Nigel Greensall charging into the front in David Gooding’s car.  But when Greensall handed the car over to the less experienced Gooding with a 27sec lead after the pitstop, the latter was mercilessly hunted down by Craig Davies. 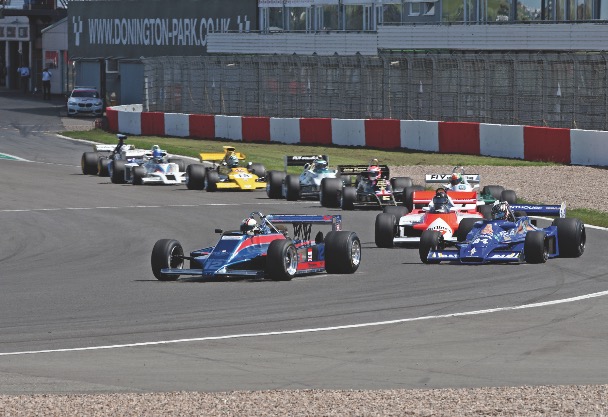 For a full report, see out September issue