It’s subjective of course, but, if speaking to a cross-section of competitors is any guide, the 22nd Goodwood Revival Meeting, bathed throughout in glorious Indian Summer conditions on 13-15 September, was right up there among the best from their side of the fence.  Celebrations of the 60th anniversaries of Cooper’s first Formula 1 championship titles with Jack Brabham and Aston Martin snatching the world sportscar crown from under the noses of Ferrari and Porsche in the dramatic Royal Automobile Club Tourist Trophy here and Sir Stirling Moss’ imminent 90th birthday added to the occasion. 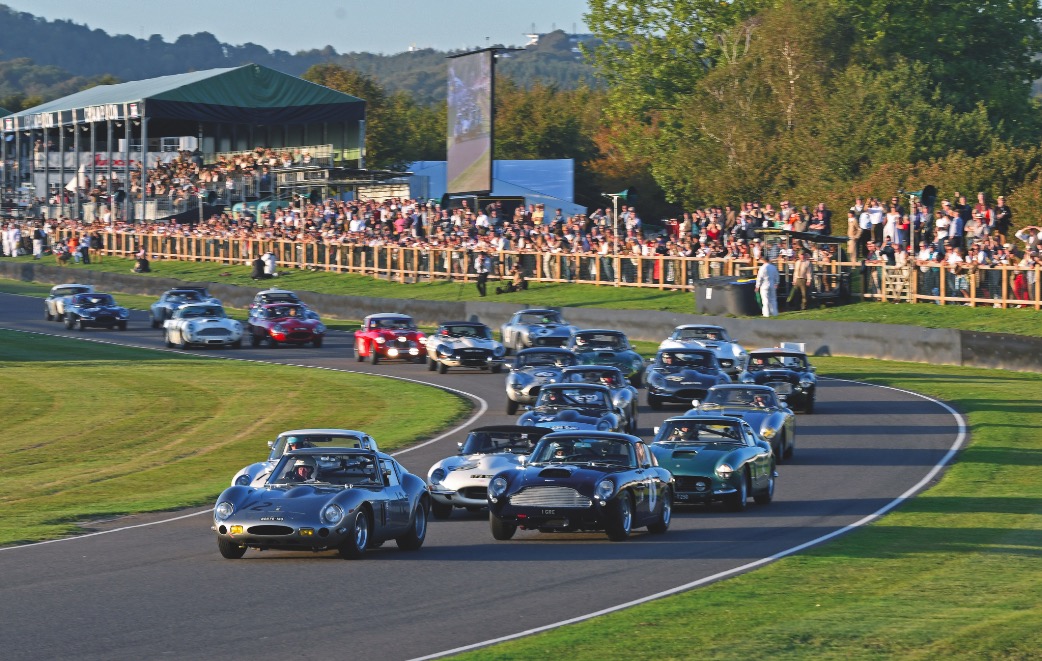 Friday’s Kinrara Trophy race for Pre-‘63 GTs was a beautifully evocative snapshot of a stunning era set against the backdrop of a perfect sunset.  Photos Eric Sawyer

Beyond the high drama on the former RAF Westhampnett airfield’s flowing perimeter track – the most sensational test of man and pre-1967 machinery on the planet – the Duke of Richmond & Gordon’s annual sensory feast entertained eventgoers royally.  Three of The Beatles’ Minis and a pair of four-wheel-drive ‘Twinis’ with an engine at each end were among 150 derivatives marking six decades since the launch of Alec Issigonis’ icon.  Fifty years on, the Italian Job film’s fabled coach continued the Mini theme indoors.  Perhaps most poignantly, an extraordinary assemblage of military vehicles also remembered the 75th anniversary of the D-Day landings daily.  An influx of modern era Le Mans stars replaced the British Touring Car Championship combatants, otherwise engaged at Knockhill in Scotland, and brought a new dynamic to some of the big races.  Winners of the ACO’s 24 Hours spanned 2000-2014 inclusive, André Lotterer inspiring Marcel Fässler and Benoit Treluyer to reform their triple gold Audi partnership having loved his Revival debut last year.  Elder statesmen Richard Attwood, Henri Pescarolo, Derek Bell – whose racing career started with a win at Goodwood driving a Lotus 7 in 1963 – and Jochen Mass couldn’t miss the occasion either. 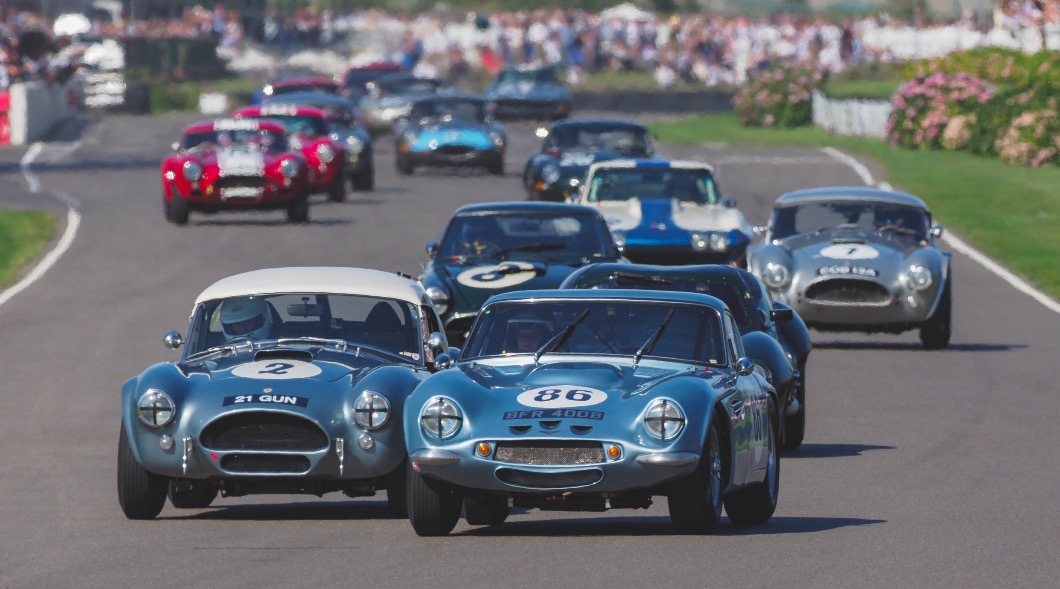 Lotterer was magnificent in the RAC Tourist Trophy Celebration, the Belgo-German taking Chris Wilson’s AC Cobra past Romain Dumas on the long adverse-cambered Fordwater kink on lap 25 and drawing gasps from the knowledgeable audience to cement victory.

Friday’s Kinrara Trophy race for Pre-‘63 GTs was a beautifully evocative snapshot of a stunning era.  Run against the backdrop of a perfect sunset it set the scene for the weekend’s sport.  Gary Pearson and Andrew Smith outran the opposition in Carlos Monteverde’s gunmetal silver Ferrari 250 GTO. 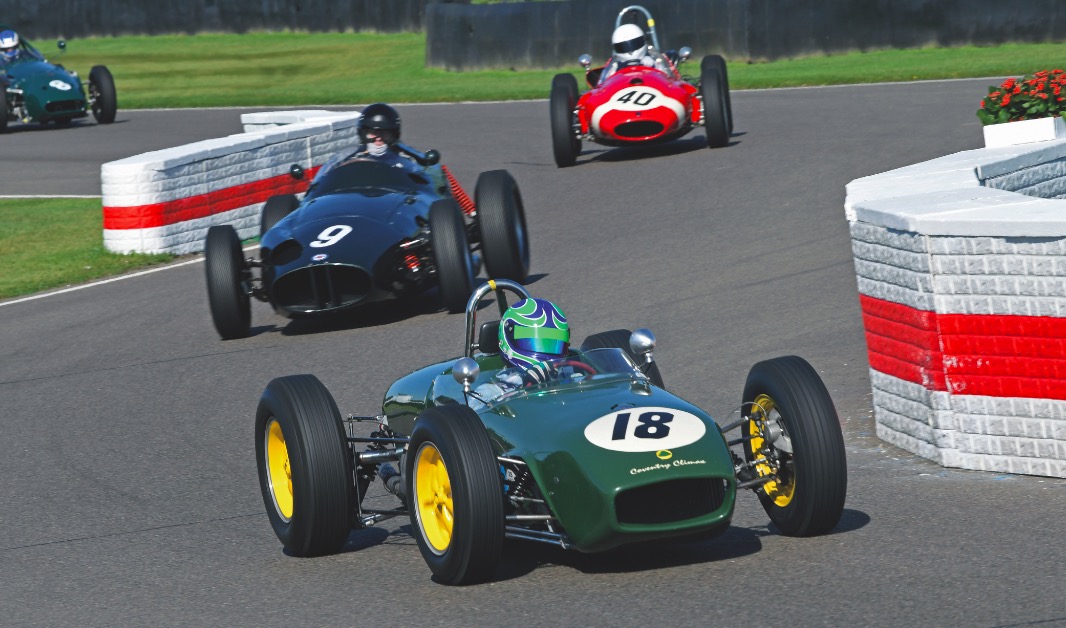 The ninth Duke of Richmond – pre-war Brooklands Double Twelve race winner Freddie March (1904-1989), grandfather of our generous host – was enamoured with 500cc Formula 3 even before Stirling Moss won on his Goodwood racetrack’s opening day in September 1948.  Although the Earl of March Trophy race had not graced the Revival since 2015, Peter de la Roche won it again, stemming the Norton-engined challenge in a 1951 Cooper Mk5 powered by a humble JAP motor.. 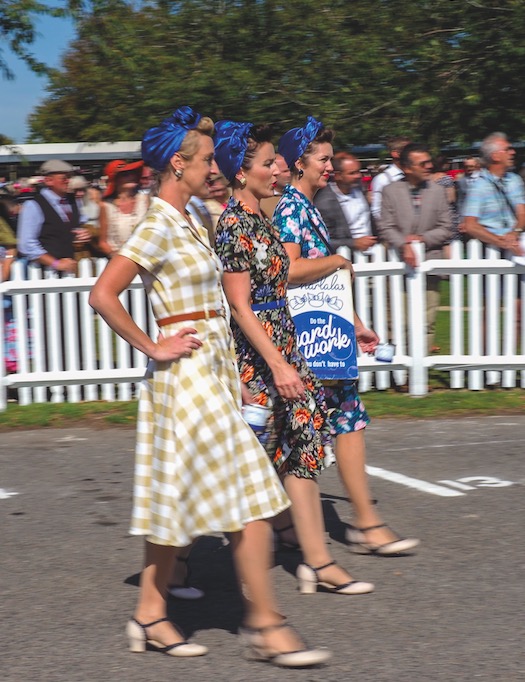 Geoffrey Taylor’s Alta concern in Tolworth built some fast cars in the 1930s, but they tended to be fragile, thus played second fiddle to ERAs.  Gareth Burnett turned that formbook on its head by dominating the Goodwood Trophy race from pole, as the quickest ERA, the ex-works/Raymond Mays R3A with five-time race winner Mark Gillies in, retired in a spray of water.  Car of the race was Stephan Rettenmaier’s delectable ex-Franco Rol Maserati 4CLT, a sister to Reg Parnell’s 1948 and ‘49 Goodwood winner.

Early Bentleys built between 1923-‘30 provided a marvellous spectacle as their intrepid chauffeurs jockeyed for position in the Brooklands Trophy race, celebrating the marque’s centenary.  Starting with hoods up (where fitted), with seeded pitstops to fold them, slowest cars first to handicap the quicker examples, it resulted in victory for Martin Overington in his 1929 4½-litre Blower.  At the opposite end of the spectrum Karun Chandhok, India’s second F1 driver and a great student of the sport, fulfilled last year’s Whitsun Trophy promise by winning the big banger sportscar showcase.   His precision in John Bladon’s McLaren M1A either side of a long safety car intervention staved off Mike Whitaker, who set fastest lap in his ex-John Surtees Lola-T70 Spyder. 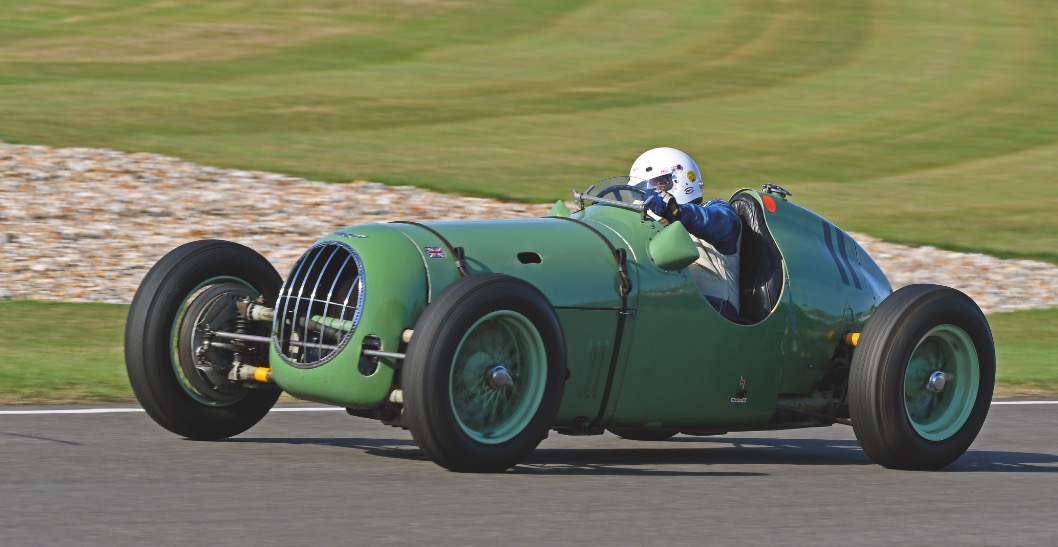 Perhaps the race of the event, though, was the Sussex Trophy ‘50s World Championship Sportscar showdown in which ice cool Kiwi Roger Wills won in the Lotus 15 that compatriots Bruce McLaren and Syd Jensen retired from the ‘58 Tourist Trophy, Bruce having run fourth behind the factory Aston Martins.  Wills somehow held off previous winners Sam Hancock (Ferrari 246S Dino) and Jon Minshaw (Lister-Jaguar Knobbly) after a sensationally close and clean scrap that raged race-long.  Hancock’s awesome overtaking manoeuvres through the high-speed kink before the devilish off-camber St Mary’s bend earned him the Rolex Driver of the Event award.

For a full report and results, see our October issue