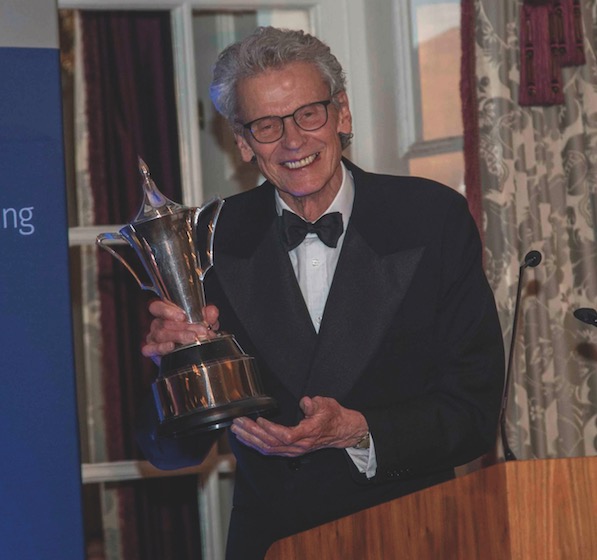 Fred Wakeman, Patrick Blakeney-Edwards and Michael Grant Peterkin were awarded the Historic Touring Car Challenge Trophy for their performance in Fred’s Rover SD1, while  George Pochiol and James Hanson were handed the Tony Dron Trophy for their consistent class placings in the Pochciol family Group 1 Esso Ford Capri by the great man himself.  Andy Wolfe won the U2TC award driving a Mk 1 Lotus Cortina with teammates Ben Tinkler and Andrew Haddon, while Steve Jones went away with the Mini Trophy for cars under 1300cc.

The pre-War ranks were well represented in a year where celebrations to mark the Centenary of the Bentley marque included a special race at Silverstone Classic.  Fittingly, Bentley racers Richard Hudson and Stuart Morley took the overall accolade for their efforts in Richard’s 3/4½ Litre Bentley.

Lister Jaguar driver Richard Kent was thrilled to collect the prestigious Stirling Moss Trophy, the actual British Grand Prix trophy won by Moss at Aintree in 1955 –with co-drivers Chris Ward and Joe Osborne.  Benjamin Eastick, Jaguar D-type racer and a stalwart of the Royal Automobile Club Woodcote Trophy was jubilant to finally get his hands on the top award in the series.  Austin-Healey 100 driver David Stanley received the inaugural Austin-Healey Award.  Marc Gordon collected the Pre ’63 GT trophy for his performances with Nick Finburgh in his Lotus Elite, proving even little cars can take the overall award.