The 2021 NKHTGT season finally kicked off at the Benelux Open Races meeting at Zandvoort on 4-5 June with a big grid shared with the Triumph Competition series.  Niek van Gils was the fastest qualifier in his TVR Griffith, posting a 2:02 lap time, with Roelant de Waard (Shelby Mustang GT350) just 0.4sec in arrears.  Jos Stevens qualified third in his Lotus Elan in marked contrast to his son Bob who did not complete a single lap due to brake problems.  Duncan Huisman was fastest of the touring cars in Cees Lubbers’ Ford Falcon, just 0.4 of a second ahead of Carlo Hamilton. 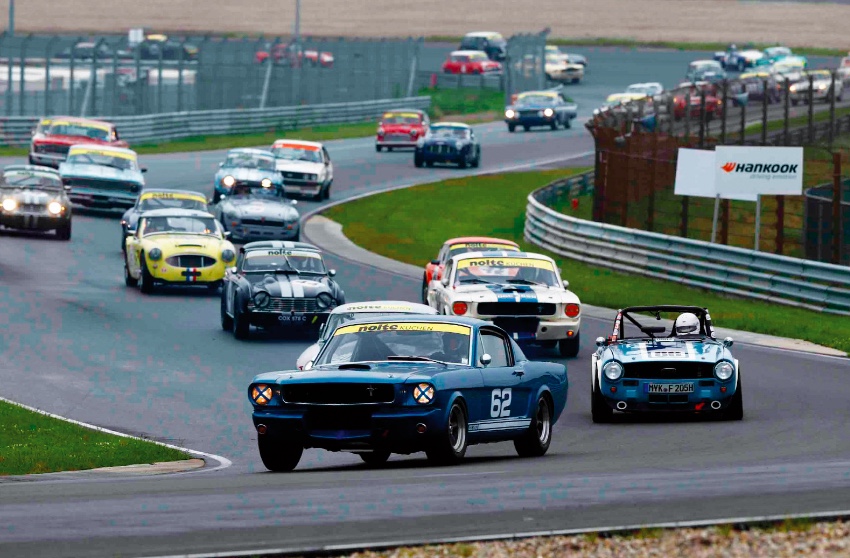 The first race was slow to start, as young Bob Stevens’ brake problems had not been cured and, with brakes locked solid, he ended up stranded on the track at the back of the circuit.  This meant a long drive for the tow truck and thus a lengthy safety car period.  However once underway the three leaders held station in the one-hour race and, after the pitstops, the order remained the same.  The touring car class produced a more exciting contest, with initial leaders Huisman and Lubbers overhauled by old hands Martin Bijleveld and Jaap van der Ende, and Carlo Hamilton, who had come from the back of the pack to take second in class in an all Ford Falcon podium.

The second race, of 50 minutes, started on a damp track that soon had a dry racing line.  Jan van Elderen was quickest away this time in his E-type, hotly pursued by de Waard and van der Ende leading the touring cars.  Proceedings were interrupted again by a safety car period that ended just as the pitstop window opened.  Bob Stevens, now with working brakes on his Lotus Elan, was one of the first to stop and subsequently went on to record some very quick lap times.  When de Waard had made his pitstop, the little Lotus was ahead and stayed ahead to score a dominant win.  De Waard came home second and first in the GTS12 class.

There was mayhem in the touring car class.  First Hamilton dropped out with engine failure, then van der Ende pitted too early and was sent on his way by the team, only to receive a stop-and-go for pitlane speeding.  After the pitstops Duncan Huisman was the man on the move, taking over the lead in Lubbers’ Falcon, but Bas Jansen was not far behind in his Mustang.  He was so close in fact that he was gifted the win when Lubbers/Huisman received a 10 second penalty for a pitlane infringement.  Bijleveld/van der Ende salvaged third in class.